We are a mere 48 hours away from new comic books, and a whole fresh crop of collections as well! If your bookshelf is in need of a trade or hardcover infusion, look no further than the top five releases of May 14, 2014: 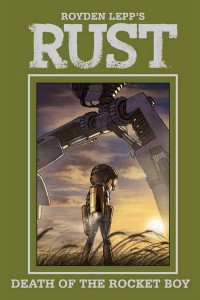 WHY WE LOVE IT: Creator Royden Lepp continues his all ages saga of Jet Jones and the Taylor family in this third and penultimate installment of Rust, giving us the lyrical and visually stunning ode to family, childhood, and sacrifice that we love.

WHY YOU’LL LOVE IT: More secrets of the past are revealed for both Jet and the Taylors as they face their darkest fears in this calm before the oncoming storm. And, of course, more high octane robot action!

Why to watch for it: Royden Lepp’s Rust saga is driving toward its conclusion, with the penultimate volume in stores Wednesday! The stakes are raised through the roof as Lepp cranks the tension dial to 11 in this excellent volume of the brilliant Rust. 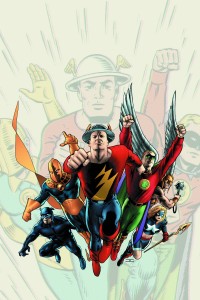 Why to watch for it: ALL THE JSA YOU COULD EVER WANT…in one book. Over 1200 pages of some of the greatest characters in the history of the DCU, written by masters of the craft. 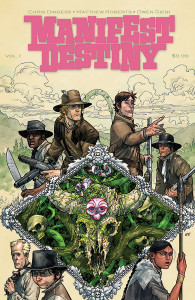 SKYBOUND’S NEWEST SOLD OUT HIT IS AVAILABLE IN TRADE FOR THE FIRST TIME AT A SPECIAL LOW INTRODUCTORY PRICE!

In 1804, Captain Meriwether Lewis and Second Lieutenant William Clark set out on an expedition to explore the uncharted American frontier. This is the story of what the monsters they discovered lurking in the wilds…

Why to watch for it: Dingess and Roberts have crafted a truly unique series with Manifest Destiny. This critically acclaimed book is the best value of the week, at only ten bucks! Give this one a shot, you’ll be surprised at how much you dig it. 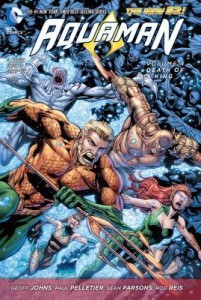 Unfolding from the events of “THRONE OF ATLANTIS” comes a mystery that sends Aquaman to the ends of the Earth to solve an ancient murder – one that will reveal a horrific truth and threaten those closest to him today! Plus, as the Scavenger compiles more Atlantean weaponry and artifacts, Aquaman enlists the aid of The Others to help find one missing relic in the Southwestern United States before his enemies can get to it and possess untold power. Collecting AQUAMAN #17-19 and 21-25.

Why to watch for it: Aquaman has been one of the strongest series of the New 52 and Geoff Johns brings home his story with this volume. The stories in the seas of the DCU have never been stronger than this run. 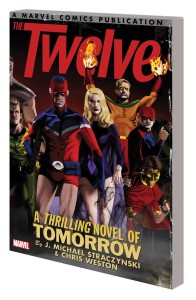 Yesterday’s men of tomorrow – today! The Phantom Reporter. Electro. The Black Widow. The Laughing Mask. The Blue Blade. Dynamic Man. Mastermind Excello. Mister E. The Fiery Mask. The Witness. Rockman. Captain Wonder. Lying dormant for sixty years, these twelve heroes awaken in a tormented world that needs them more than ever. But has the world grown beyond their brand of old-fashioned heroism? Behold the stunning post-modernist tale of sacrifice, betrayal and human nature by writer J. Michael Stracyzynski (TV’s Babylon 5, AMAZING SPIDER-MAN) and artist Chris Weston (The Invisibles, FANTASTIC FOUR: THE FIRST FAMILY). Plus: Journey into the past to follow the death-defying exploits of the Phantom Reporter on the front lines of World War II and witness his first encounter with history’s greatest super heroes! Collecting THE TWELVE #1-12 and THE TWELVE: SPEARHEAD.

Why to watch for it: This one took forever and a day to be finished, but here it is, in a single collection! JMS and Chris Weston tell a tale that is worth the wait in The Twelve.