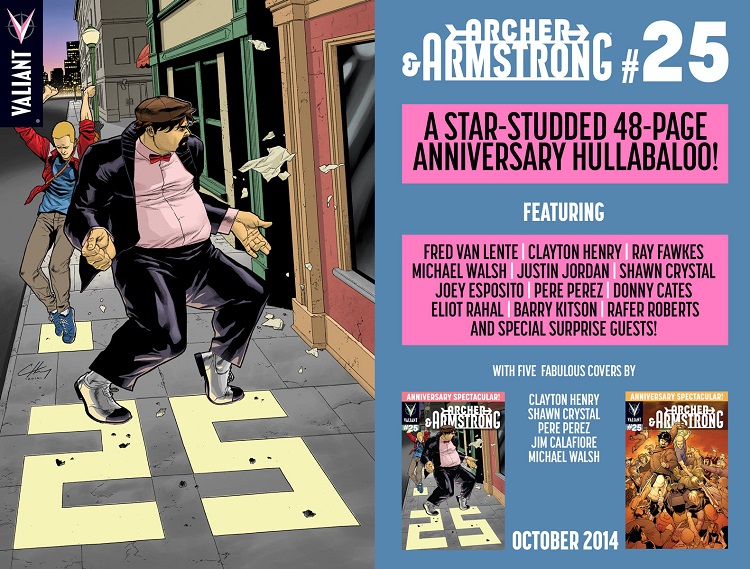 In the tradition of X-O MANOWAR #25 and HARBINGER #25…get ready for Valiant’s biggest, boldest, most over-the-top anniversary celebration yet – coming this fall!

“Since issue #1, Archer & Armstrong has been nothing short of a blast to work on, and we’ve been blessed with an incredibly gifted cast of creators along the way – Fred and Clayton, Pere Perez, Khari Evans, Emanuela Lupacchino, and David Baron, just to name a few,” said Archer & Armstrong editor Josh Johns. “Now, with issue #25 coming up, we here at Valiant wanted to build the biggest, most jam-packed milestone issue possible for the fans who have made this series a success…and finally check in on some of the long-asked questions that we planted in previous arcs. This is going to be a big one!”

For ten thousand years, the immortal currently called Armstrong has been sleeping and boozing his way across Earth, keeping one step ahead of a secret cult – known simply as the Sect – obsessed with killing him. That all changed, however, when an 18-year-old Sect assassin named Obadiah Archer turned on his masters, and joined Armstrong for a globetrotting quest to bring down the Sect’s unholy coalition of conspiracies around the world. Nazi Buddhists! Probe-happy aliens! Dead celebs! The One Percent! And even an Eternal Warrior. But Archer & Armstrong’s fight is only just beginning – and they’ll face a dire series of daft and dangerous new perils when ARCHER & ARMSTRONG #25 strikes in October!