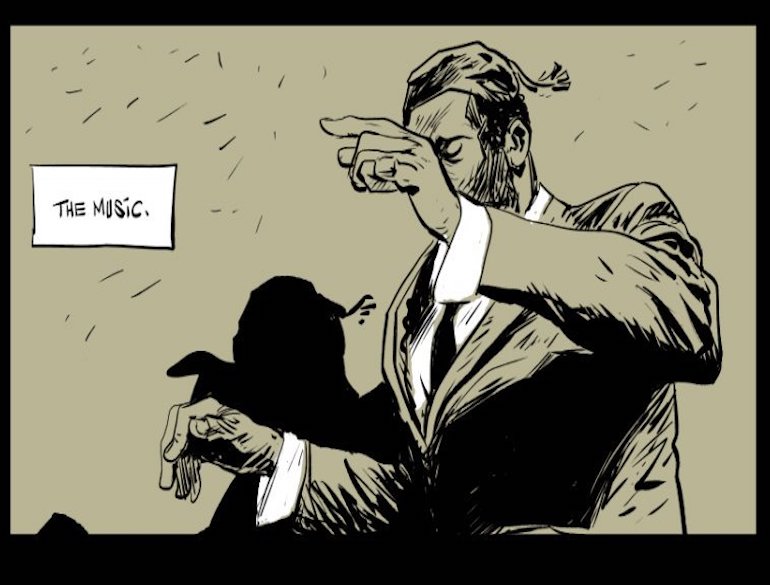 Prepare to travel back in time to the roaring Jazz scene of New York in 40s & 50s when Thelonious Monk was changing the game and blowing minds with Youssef Daoudi’s new graphic novel MONK! Daoudi was kind enough to give me the rundown of why he chose to tell the tale of the friendship between Thelonious Monk and Baroness Pannonica “Nica” de Koenigswarter and what is his favourite Monk song… 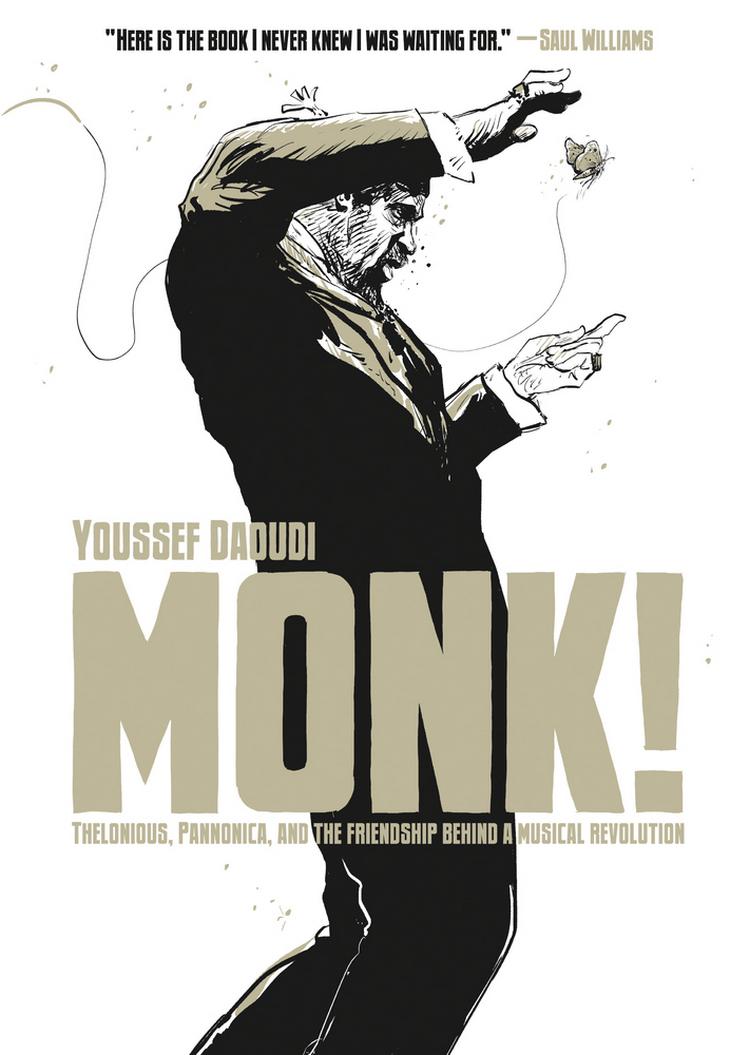 Aaron Long: There are many legends in the arena of jazz, what drew you to telling the story of Thelonious Monk?

Youssef Daoudi: I’m no musician but jazz is my music. It is so important to me, to my sanity.  Thelonious was not only one of the greatest composers in jazz music, I think he was the embodiment of it: uncompromising freedom and incredible creativity. He was most importantly a very special being. His music, playing and strange ways were unmistakable and he was a very complex and unbelievably sensitive individual. What can I say? I simply love everything about this guy!

In my case, a project often begins with a single, particular sketch or drawing. There was that picture, from the late sixties I think, of him leaning on the piano and staring at the camera that was hunting me for some time. He was well dressed, “sharp.” His eyes were like the gates to a mysterious mind, one of a genius or a magician, which he undoubtedly was. And then, there were that smile full of mischief, which emerged as I laid the many strokes to build his dense facial hair and goatee.

I took that smile for an invitation! 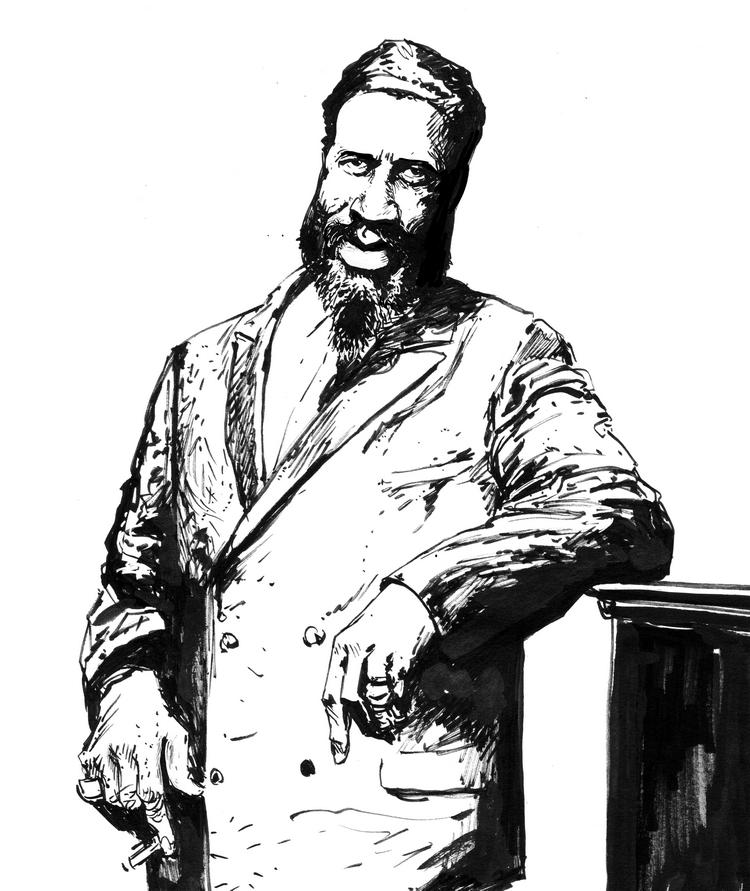 AL: As you researched the relationship between Thelonious and Pannonica, what aspect of their friendship surprised you most?

YD: Strangely enough, I wasn’t surprised by any. To the contrary, I felt very close to Nica’s passion for the music and what it meant to her: Freedom and independence. To achieve total and unconditional liberty, she resolved to live near the people that made that music and in particular, to be near Thelonious. I assume she felt that Monk literally incarnated those traits.  And she wanted to protect him at all costs, despite prejudice and envy, in an attempt to protect herself, to find a kind of salvation.

The other great thing about their relationship is that it gave me a great approach to the story, so we get to know Thelonious through Nica’s eyes as well.

AL: Your art captures the improvisation and flow of jazz extremely well. Can you discuss your creative process for this OGN? Was there a level of improv in your approach to storytelling?

YD: Thank you. MONK! is not a book about jazz, but rather a book in jazz. At least, I tried to write and draw with that idea in mind. I wanted to mimic the structure of a jazz tune, namely a set of chords accompanying a melody in choruses where improvisation solos can occur.

The story begins in Nica’s “Cathouse” like the head of a song, and each chapter and interlude serve as a chorus. I improvised in some of them (especially the dancing pages) by drawing directly, letting the narration lead me, or giving complete control to a given character. Monk’s attitude and philosophy was extremely inspirational in the process; I just wanted to resemble him in a certain way, to get rid of any preconceived idea, to just do things I love, like he always did.

The whole experience was bliss! Even when I was working extremely hard in the final stages to pull off the book! 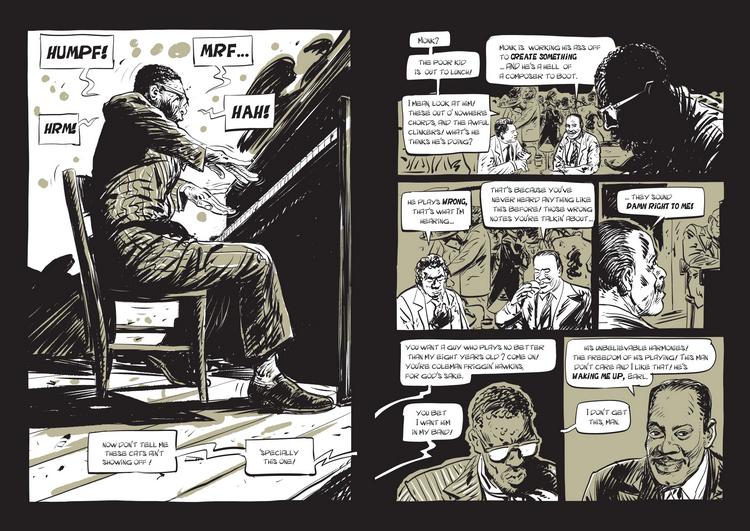 AL: How did you choose the colour palette for MONK!?

YD: When it comes to comics and drawing, I’m more into the dark and light aspect than the color one.  I knew it was going to be one dominant color, preferably one that would not compete with or hamper line art.  I usually put a great deal of strokes and tiny random lines everywhere so I wanted to strip down the color component. I’ve tried blues and purples for a while, and then I decided to settle on the brownish, kraft paper kind of color. I like that.

AL: You succeed at this greatly throughout the volume, but what was the most difficult part of conveying jazz in a medium that cannot utilize audio?

YD: This is quite a paradox indeed. Fortunately, reading is an active process. It triggers the imagination and we naturally tend to “hear” voices and sounds whether we see onomatopoeias or not. Regarding music, it’s a little trickier and I guess one have to listen to a couple of tunes to figure out the kind of music in question.

Also, music is about rhythm still, so I tried to put as much as I could, in the “editing,” dialogue and page layout but the challenge was to find a beat, a pulse with the medium. But after all these “calculations,” I had to forget about them and rely a lot on instinct and pure feeling. 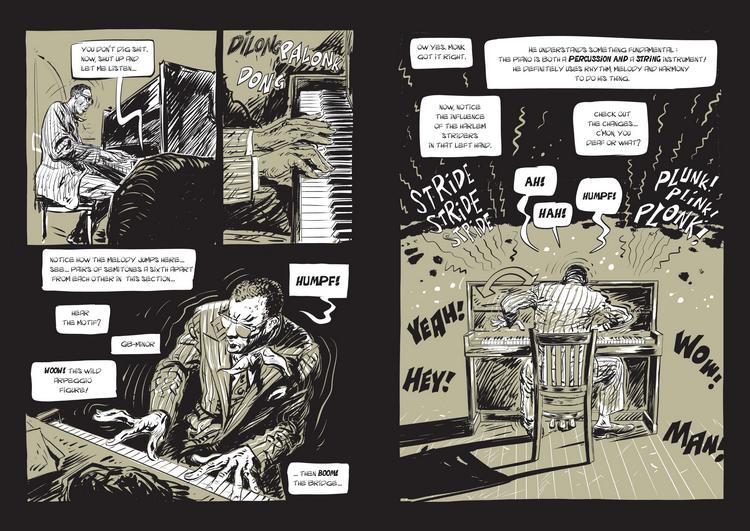 AL: You provide a playlist in the back matter, but I’m going to ask an evil question: what is your favourite Thelonious Monk song?

YD: Evidence, hands down! This tune is so Monkish! This particular one helped while I improvised the dancing pages but there are a lot I like of course and they have the same energy and drive like Criss-Cross. Oh, and, depending on the weather, Monk’s Mood.

That was indeed an evil question!

AL: Any final words for Comicosity’s readers about MONK!?

YD: You don’t have to be a jazz buff to read this book because it’s mainly a story about genuine friendship, freedom and creativity.

I’ve only scratched the surface of a huge monument and I feel honored to have been able to make this graphic novel about one of the greatest geniuses of our time.  I hope it’ll make readers not familiar with Monk or his music know a little about him and why not, discover the beauty of his work.

Finally, from an artist’s standpoint, Monk was extremely influential in my style and I’m so grateful for that.