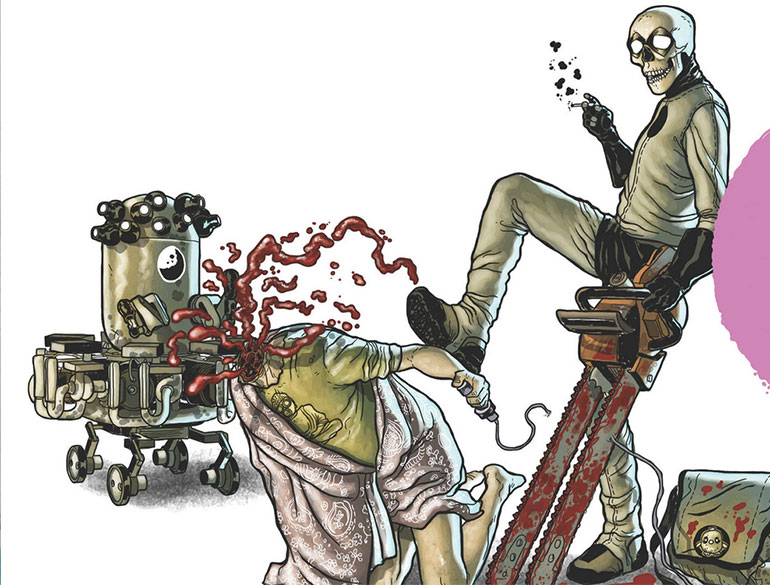 The first encounter with this graphic novel is a violent and disturbing image.

A soldier with a skull instead of a face is laughing after cutting off another’s man’s head.

The victim looks more as a member of the Hare Krishna movement than a criminal. The man who was executed is falling and his lost head is covered by a gas mask. It is interesting to note that the man is wearing a t-shirt with an image very similar to Buda, who is also wearing the same gas mask as him. 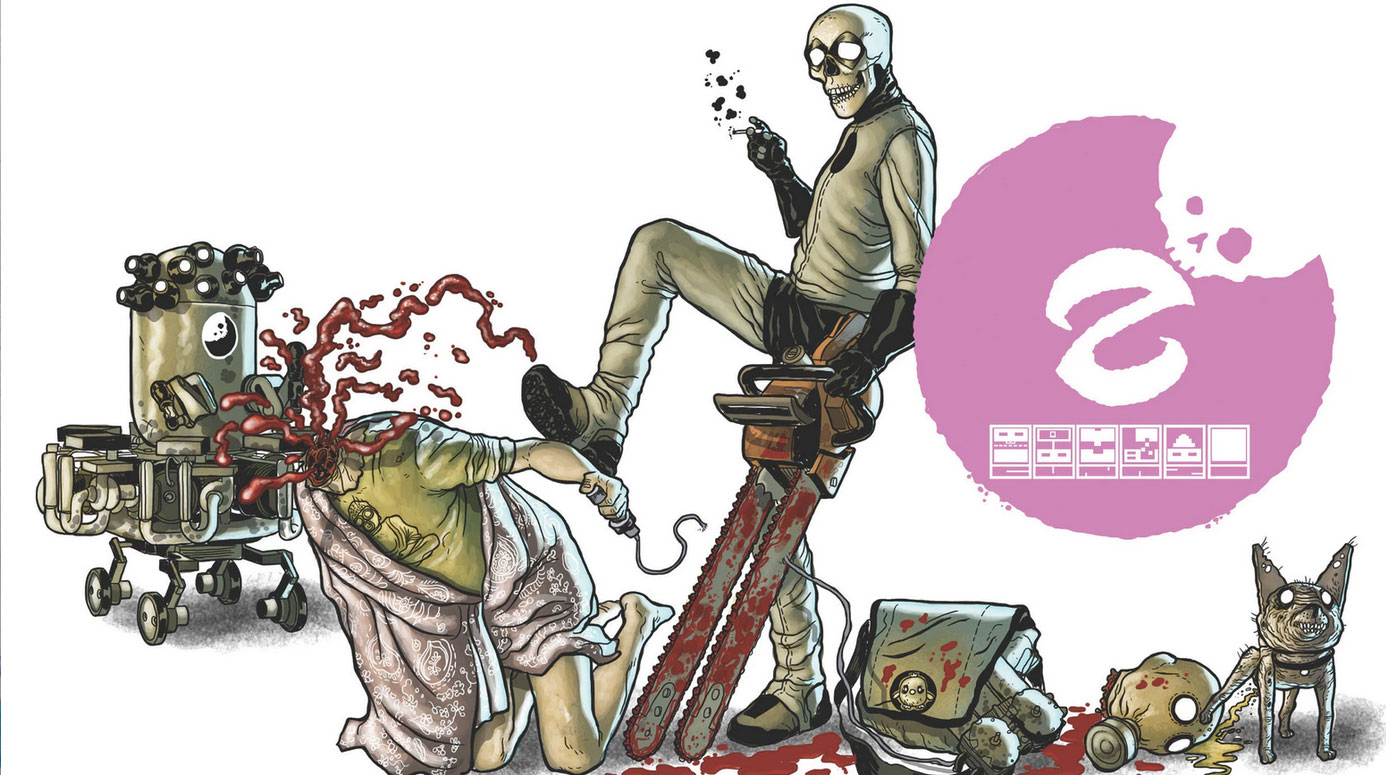 At the beginning of the story, we follow a Tibetan monk through a poor, violent and crowded city, where people died in streets and gangs fight to each other. The image we saw before, the deity on the executed man t-shirt, appears, several times adored as a divine figure. Candles burn around him, and prayers kneel before him.

The soldier — the protagonist, we guessed — is the same man who has a skull instead of a face. He is some sort of an investigator and he is looking for anarchists and rebels — a group of terrorists that make bombs using the ingredients in certain foods. So the expectation given on the first page transforms, and can be read in a different way.

These “monks” are not as innocent and defenseless as they look. The group of “monks” is comprised of various kinds of men, all wearing gas masks, all believing in the same deity, and lead by a man that wears a turban and floats on a cloud.

The author of this graphic novel called simply Z is the artist Valentin Ramón. In this graphic narrative the author does not use words and the word balloons are used as representations of the voice of each character — who express themselves in a strange and intricate language. In this sense, the visual representation of the language is also metaphor for how words can be transformed into something strange and almost incomprehensible. 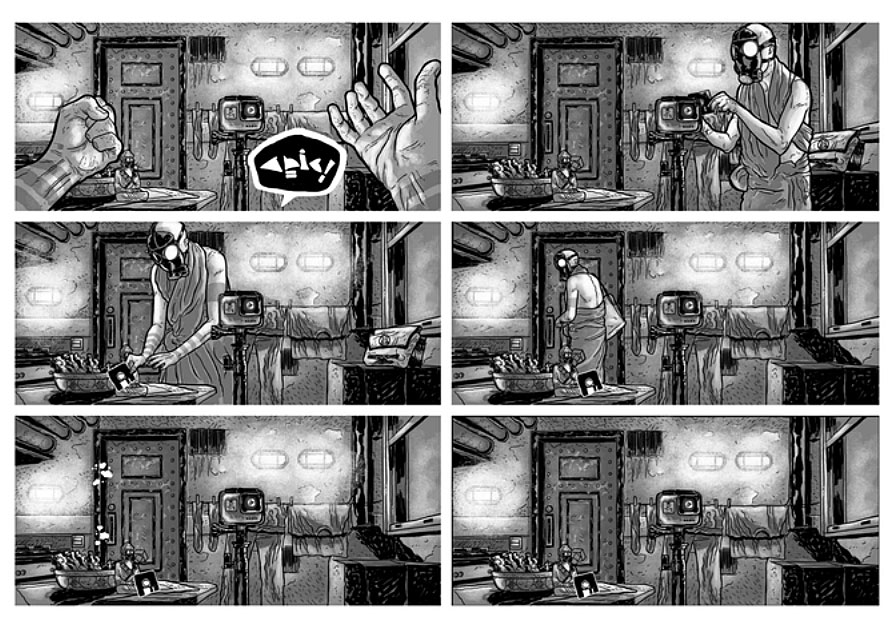 Z is a display of technique and attention to detail, although the aesthetic of the work is grotesque and violent. The skin of the characters, for example, looks in putrefied state, as if their body were decomposed. The patients in hospitals are mistreated and humans are transformed into hideous figures, treated as if they were stupid — not as individuals, but as disposable objects whose lives do not have any value. This representation of the characters is also visible in the city where the surroundings look dirty, polluted, and overpopulated, making the city a decadent place. In this sense, this graphic novel offers a ferocious and raw view of how cruel our reality can be. 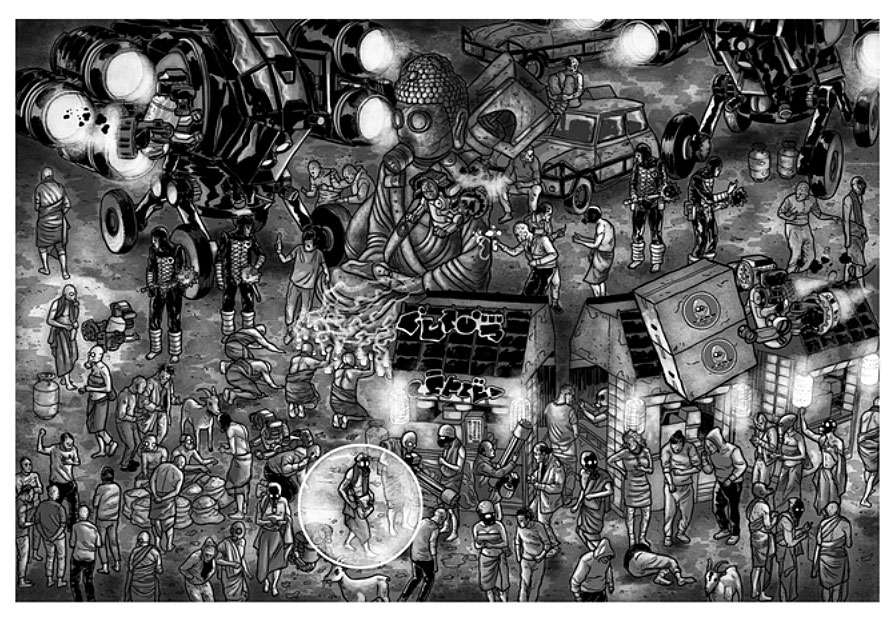 In the story, it is difficult to differentiate between the heroes and the villains since all of them collude and apparently, they are willing to do anything to become richer and powerful. Despite all the despicable acts of the people in power — who in this society they may be the only ones that could do something about it — they decide to close their eyes, literally, and keep going as nothing happened. This is just one of many examples in the graphic novel that shows us how a social situation is part of a system where media, economy, and religion are related to each other and how religion can be transformed in a mechanism of control and mental alienation.

The theme of religion is also one of the topics that Ramón addresses and, in the story, he shows the contradiction between the principals of love related to a certain religion and how it can be transformed into a mechanism of control and instigation to anarchism. 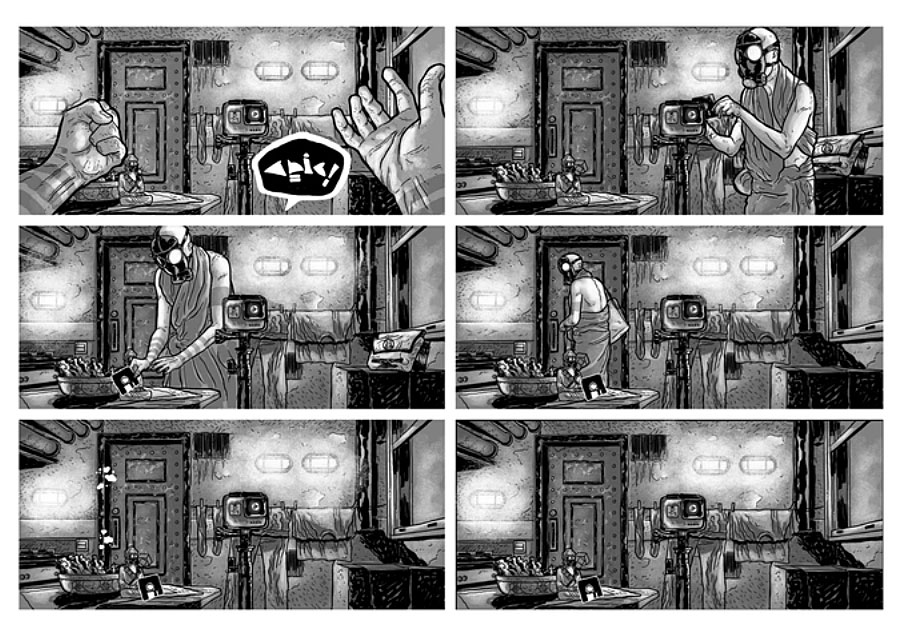 The author creates discomfort for the reader and this repulsive scenario is very effective in transmitting how disgusting a social and political crisis can be and how we refuse to see it that as part of our reality. In Z, the civilians are not able to do anything because they are not even capable to be conscious of what is happening. They are alienated by media, noise, poverty, and dirt. The results of corruption, lying, and fraud are also part of the reason for the decadence of the world represented in the graphic novel. 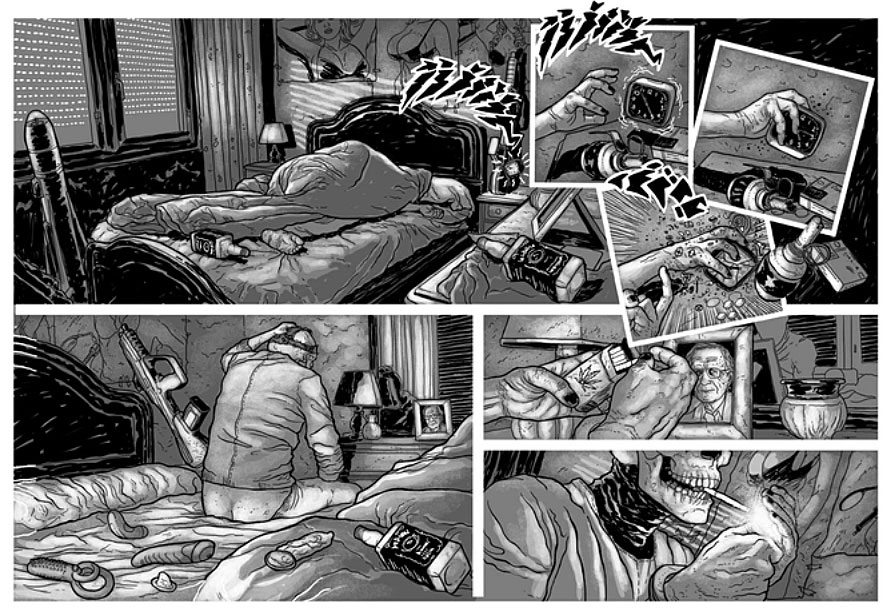 Ramón emphasizes the outrageous and disturbing aspects of his story to see up close how disgusting it can be. By exaggerating and expanding the grotesque, the author makes us conscious of the situation. In this sense, the hyperbolic visualization of the characters and their surroundings is part of a process that creates awareness and consciousness in the reader.

The details in the drawings, the care in composition in black and white images, the members cut off, the mutilated bodies and scatological images abound in the pages. Brains that go out from the cranium, intestines that tangle up around bodies, corpses destroyed in pieces, excrement, unpleasant fluids. It is almost like if we can smell all these stinky elements. 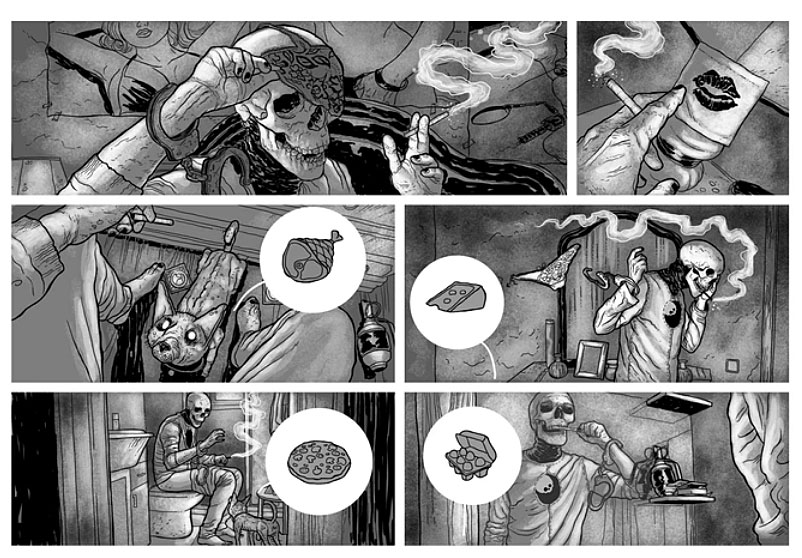 Despite the intense action and the explicit images, in one of the last panels of the graphic novel, the protagonist remains standing and watches the sun go down, almost as an idyllical image, where there is no explosions or screams invading the panel. The image might look beautiful and peaceful giving us the impression that at the end, everything could become better.

But we know, after this visual journey, that something truly horrible will always remain.